WHEN RELATIVES VISIT - ANOTHER STORY 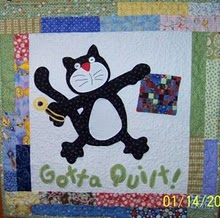 Since I’ve been lying on the couch all week nursing a sinus infection, I have no quilting to share with you.  However, I’ve had plenty of time to think and it occurred to me:   Some people just do not appreciate quilting.

Recently my just turned 14 year old granddaughter, Susie, came with her family for a visit.  It was to be a long stay while their house, which was in another town, was being remodeled.  I had mixed emotions about the stay as my DIL is a gourmet cook and I’ve never felt that my skills met her standards. I promised not to let it bother me and focused on what I would do with my lovely grandchild.

I fondly remembered the times we all went camping.  Years ago, when the grandchildren were younger, all my children, their families and Nana (that’s me) would spend a week each summer camping.  We’d haul RVs, trailers, boats, tents, and enough food to feed an army, to a state park where we enjoyed each other’s company.  We went swimming during the day and told stories around a camp fire each night despite the 90-degree heat.  One day the men said they were going to catch some rays on the beach, which in my book is man-speak for “let’s go look at the babes in bikinis.”  We women spent our afternoon sitting around the picnic table playing games with the children.  I think Susie was about eight years old at the time.  When we finished our current game of Old Maid or Hi Ho Cherry Oh (I don’t remember as I was probably brain dead from playing said game a hundred times), my daughter (the mother of three kids herself) said she had to go to the bathroom.  Susie held out her chubby little hand and said, “I’ll take you.”  We giggled and I thought about what a sweet child she is.

Roll ahead a few years.

After the grandkids reached a certain age, the camping trips stopped.  Instead, the children attended band camp, Scout camp, baseball camp, you name it.  There was no time for family camping any more.  Since both my sons lived in another town I bemoaned the fact that I didn’t get to spend enough time with my grandchildren.

So, when my son called to ask about staying with me for a few weeks, I was ecstatic.  Now certainly the kids have been to my house before; however, since the time when they were young, the basement has been off limits for obvious reasons.  They could fall down the stairs; they could hurt themselves on the tools.  Besides, it was the only place for the cat to escape from their little grasping hands.

However, Susie was now a teenager and I knew just the thing to keep a teenager from getting bored.  I would teach her how to quilt.  We would have something in common, a bond that would last forever.  Every young lady as sweet as Susie needed to learn the wonderful relaxing art of quilting.   It was a rainy day; Dad was at work, and DIL was busy reading the latest issue of Martha Stewart Living, no doubt planning some new concoction for dinner that night.   I decided to make my move.

“You’ll see,” I said as I lead the way down the stairs to the basement.

We descended into the dark cool room and I flipped on the bright overhead lights.  After letting our eyes adjust I proudly waved my arm around the room.  “Here it is,” I said my tone bursting with pride.  Trying to add some humility I said in a quieter tone, “This is my hiding place.  This is where I escape from the world and have fun.”

Her eyes grew large as she took in the site.  “What a mess,” she mumbled.

I looked around.  Things didn’t look too bad. I guess I should have put away the small pile of 2-inch squares that lay on the table next to the rotary cutter.  I guess I could have put away the bag of chalk after I had filled the pounder.  I guess I could have straightened the piles of fabrics and made things neater.  I admit, when I’m working on a project, chaos does tend to develop.  But really, it’s just a few piles of fabric.

I stood there admiring my collection of brightly colored fabrics, my stacks of yellows and reds, my collection of oranges and grays, my gorgeous pile of greens.  “It’s my stash,” I said unable to stifle the pride in my voice.  As I eyed my various colors in their cubbies lining the walls and piled on the table I heard Susie draw in deep breath.

Turning, I saw the startled look on her face and wondered if she saw a mouse or heaven forbid something worse had come burrowing in from the field.  I cast my gaze around the room, looking into every nook and cranny only to hear that same sweet little girl who wanted to take my daughter to the bathroom that summer long ago, turn and stomp up the steps as she screeched, “Mom!  Nana is doing drugs.  She’s showing me where she hides her stash.”

(Only the names have been changed to protect the innocent)
Caroll D West Michigan Quilter at 2:00 PM

Well I certainly hope you feel better soon! You sure did my spirits good with this LOL post! thanks!! 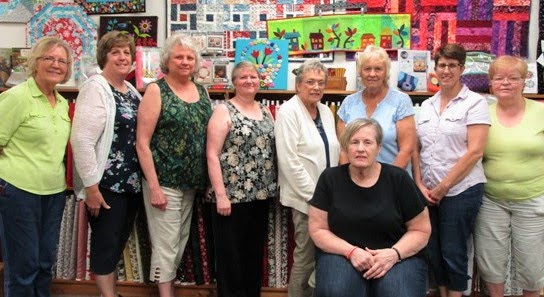 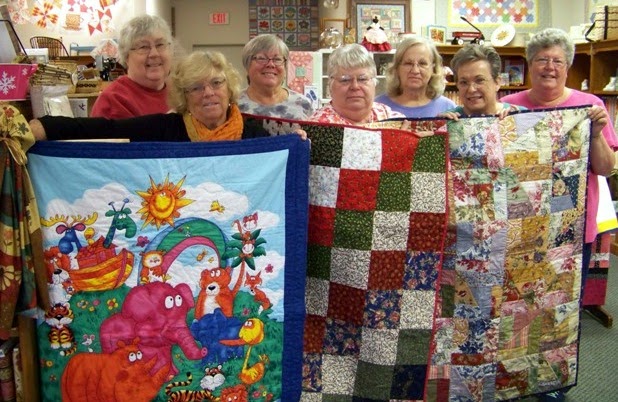 Many thanks and much appreciation goes to the women who work diligently each month to make quilts for those in wheel chairs. Kudos go to: Yvonne, Mary T., Fran, Joan, Mary Ellen, Barb, Lee Ann, Nancy, Mary.

Quilting for Kids With Cancer 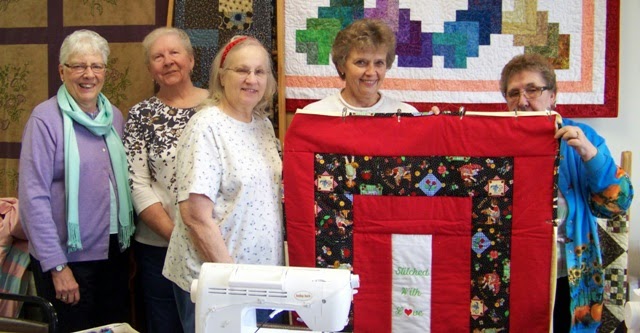 Generosity has no bounds. Above are the women in the Quilts For Kids group at the Attic Window Quilt Shop. Left to right, Henrietta, Phyllis, Nancy, Carol, Karen. These women donate their time, fabric, money once a month to make quilts for kids who have cancer. 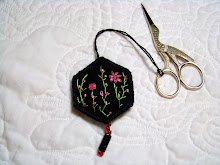 Free Pattern For You 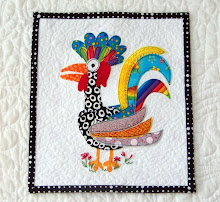 My Way to Applique Tutorial 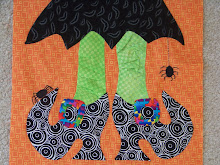 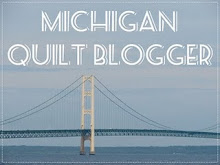 This blog is dedicated to the women and men of West Michigan who would like to attend the Attic Window Quilt Classes. This is where you can see the class samples and pictures of the teachers. Be sure and stop back from time to time to check out what is new. You may email me at westmichquilter@gmail.com